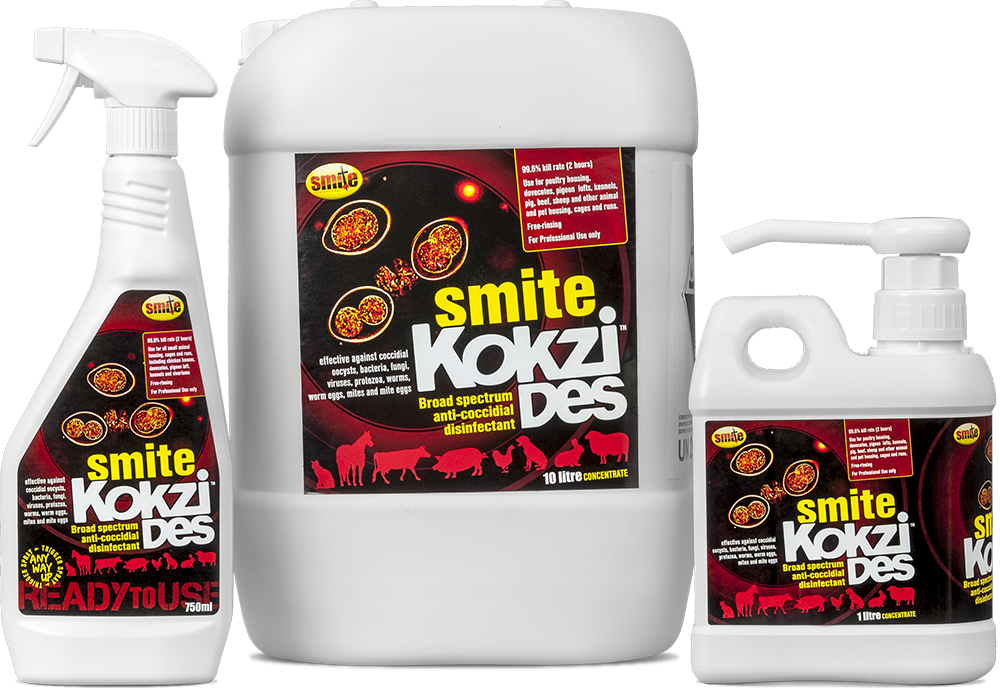 • Suitable for all animal housing

*DEFRA does not have an approval scheme for anti-coccidials, but Kokzi Des has been approved as an anti-coccidial by the prestigious German organisation, DVG, the German Veterinary Association.

Use biocides safely. Always read the label and product information before use

In addition to coccidial oocysts, Smite KokziDes is also effective against such bacteria as Salmomella, E. Coli, S. Aureus, S. Equi, viruses such as Influenza, IBD, IBR, Coronavirus and Parvovirus and fungi such as Ringworm and protozoa (e.g. Giardia, Toxoplasma, E. Cuniculi). It will also remove endo and ectoparasites including roundworms, tapeworms, threadworms, lungworms and their eggs.

Smite KokziDes is suitable for all types of animal housing, pig, poultry and beef housing as well as pigeon lofts, kennels and catteries. For very small pet housing Smite KokziDes RTU Ready-to-Use trigger spray may be more appropriate. Smite KokziDes can also be used in footbaths to protect against transfer of micro-organisms between sites.

Smite KokziDes Professional Concentrate is a surface disinfectant and it should NOT be used in the presence of animals. All water, food, bedding and appliances should be covered or removed while disinfection is in process and can be replaced when surfaces are dry.

In most cases, a single application, left in contact for 2 hours, is sufficient and it is not necessary to rinse the surfaces.

Coccidiosis is an acute infection which affects the mucus linings of the intestines, and is particularly important in poultry, pigs, sheep, goats, cattle and also rabbits (in which the liver can also become affected). It can affect dogs and cats, although in these species the disease is often sub-clinical and not diagnosed as often. The causative organism is usually a protozoa of the genera Eimeria or Isospora although each distinct form of coccidia is not only host-specific and so is not passed from one species to another, but it is also site-specific in that it only affects one specific part of the gut.

Coccidiosis is seen everywhere and is clinically most apparent in young animals in confined housing, although older animals can also be affected, particularly when they have not been previously exposed or where other environmental or disease stress weaken their immunity.

When trying to combat the effects of coccidiosis, it helps to understand the lifecycle of the parasite. The lifecycle starts with an unsporulated oocyst, which is similar to an egg, containing an undeveloped stage of coccidiosis. The oocyst has a thick wall which protects it from heat, cold and even common disinfectants and it will not develop until it is provided with the right conditions of warmth, oxygen and moisture; this usually occurs within 1-2 days and the oocyst becomes sporulated and thus infective. The ability to lie dormant awaiting the right conditions enables coccidiial oocysts to survive for up to several years and makes it difficult to destroy them, although they can be killed both by freezing and by excessive heat. Coccidia populations take time to build to critical levels, so typically the illness shows itself at between 3-8 weeks of age. 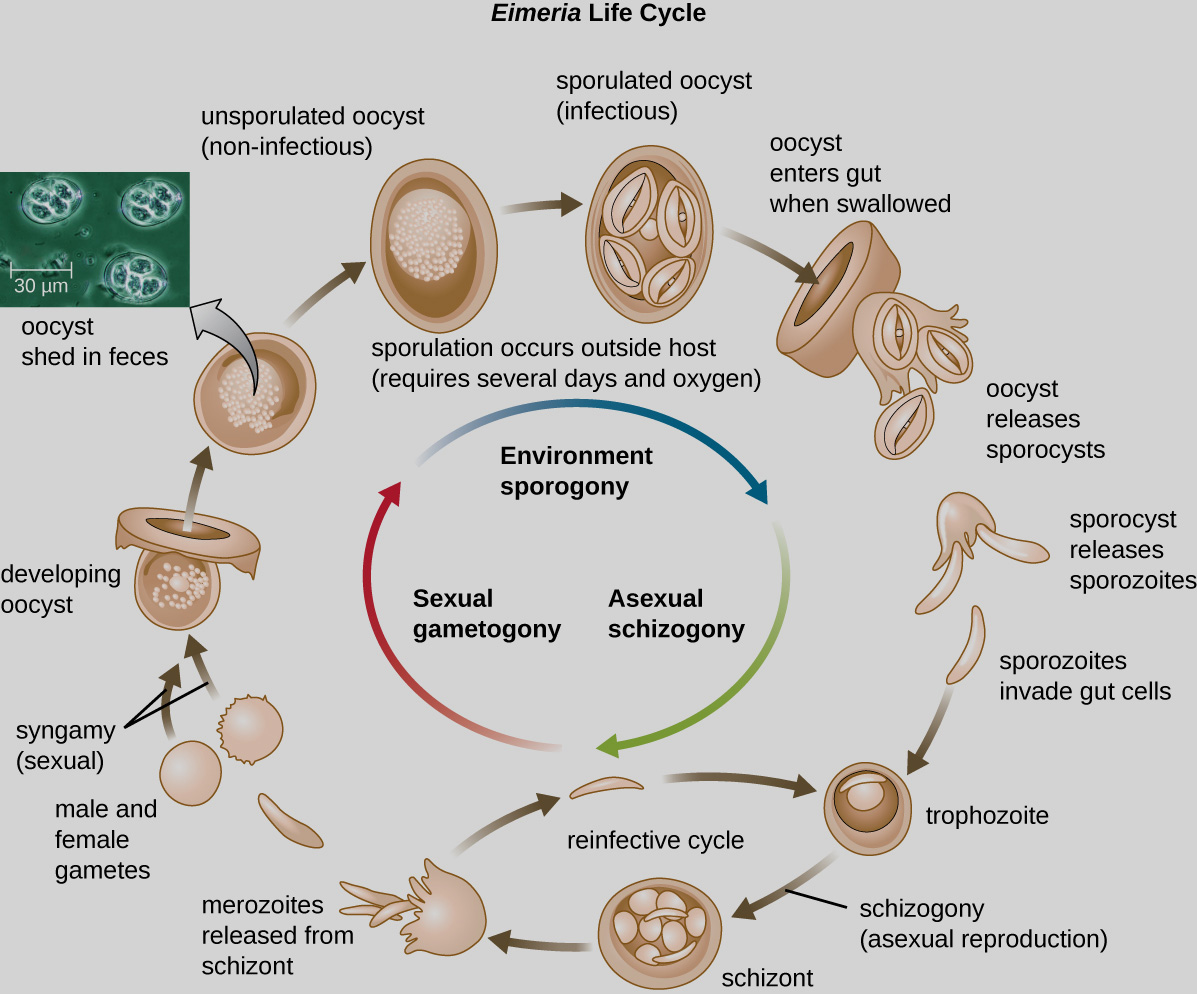 When the sporulated oocyst is eaten by a chicken, or other animal, enzymes and acids in the gut break down the outer wall of the oocyst and release the sporocyst – which is the infective form of coccidiosis. The sporocyst becomes a sporozoites, which quickly invades the cells of the gut wall and replicates. The sporozoites, in turn, release a further stage in the cycle, called merizoites – which then go on to invade and destroy even more cells of the gut wall. In due course, the infection runs full circle and produces more oocysts – which the chicken then passes out of the body with the faeces and which then lie in wait to infect another animal. The complete life cycle can take as little as 4-7 days.

Throughout its lifecycle, a single oocyst can end up destroying thousands of cells in the gut wall and if a large quantity of oocysts are consumed, so many millions of cells will be destroyed that it produces clinical symptoms, which are incredibly painful to the host, causing them to stop drinking and eating, lose weight, become deficient in nutrients and suffer diarrhoea and blood loss, causing anaemia. It can also change the balance of bacteria in the gut, allowing bacteria to cross through the gut wall and cause septicaemia. Typically, the animal looks extremely miserable. However, if the animal is lucky enough to only consume a few oocysts then the damage to the gut wall will be minimal, without producing clinical symptoms and it is possible to build up an immunity to the infection.

Given the universal presence of coccidia in the environment, best practice husbandry aims to minimise the quantity of oocysts to which the young animal is exposed, as far as possible, using specifically-targeted disinfectants, such as Smite Kokzi Des, prior to chick placement or introducing young stock, so that in the first few weeks of life, the animals are exposed only to low levels of infection which will allow them to build up an immunity. In general, older animals have already developed an immunity and will be resistant, though immunity to one species of Eimeria will not create immunity to any other variant of coccidia, so it is possible to become overwhelmed by a different, previously unencountered species later in life; one example of this is in ex-battery hens, where the birds were not exposed to their own faeces in early life and have therefore not developed immunity.

Animals and birds which have been affected by coccidiosis will rarely ever regain full productivity and in severe infections the gut remains scarred and impaired. Affected broilers do not catch up in weight gain. This means that the economic and financial losses associated with coccidiosis are considerable and well worth going to some lengths to avoid.

Prevention is ALWAYS better than cure!

Cleanliness is extremely important in minimizing exposure to coccidia as is regular changing of bedding, water supplies and feed. Feed and water should be raised off the litter and feed should be kept topped up, in order to reduce foraging in the litter to a minimum. Coccidia need warmth, oxygen and moisture to thrive so attention to keeping bedding dry (below 20% humidity) is extremely important; this can be helped by use of a bedding conditioner, such as Smite Agrisec 250 or Agrisec 250 Plus

• Make sure that all old litter is removed before placing new stock.

• Use a detergent disinfectant, such as Smite Professional to remove all organic matter and grease build-up

• Follow up with a targeted anti-coccidial disinfectant such as Smite KokziDes to remove and kill any remaining oocysts. Smite KokziDes has a 99.6% kill rate when applied as instructed.

• Add an absorbent powder, such as Smite Agrisec 250 to the litter or bedding to reduce the available moisture in the environment. (Smite Agrisec 250 absorbs 1.5 times its own weight in liquid – the most absorbent bedding powder on the market!).

• Position them so as to minimize water spillage onto bedding litter, as moisture promotes the growth of cocci.

• Do not overcrowd birds.

• Don’t keep birds in the same enclosed area for extended lengths of time, rotate them periodically to another area

• Practice good sanitation and minimize accumulation of faeces by cleaning at least once a week.

• Design roost areas over screened dropping pits for faeces, to minimize contact birds have with faeces.

When stock is affected by clinical signs of coccidiosis

• Stop further gut damage which usually needs an anti-coccidial medication from your vet.

• Some herbal preparations can also be used to support gut health. Fruits and herbs which contain a good source of antioxidants has been shown to be beneficial – sources such as cranberries, pomegranate, green tea, grape seed extract, rosemary, oregano

• Clean out the bedding/litter and disinfect with Smite KokziDes, to remove as many oocysts from the environment as possible. Add a good bedding powder such as Smite Agrisec 250 to the litter, to reduce moisture

• Provide as much TLC as possible. A warm, dry environment is essential and provision of suitable multivitamins and probiotics will help redress the damage.

© PestTrappa 2018. The whole of this website, its design, information and downloads are copyright and is made available for the use of SMITE resellers and their customers. Any reproduction or further publication of this document, in whole or in part, by any means, may be made only with the express permission of PestTrappa and its origin should be acknowledged. Smite and Smite Professional are Trademarks of PestTrappa. Contact: PestTrappa Tel: +44 (01246) 264635 or info@smite-a-mite.com